The mythical civilisation of Atlantis has spiritual lessons for today

The mythical civilisation of Atlantis continues to capture imaginations worldwide. Countless books, artworks, songs and films have been produced about the mysterious island and its inhabitants. The truth about Atlantis has been sought throughout the ages by historians, philosophers, explorers and spiritual seekers. Currently, Atlantis is the subject of a primetime BBC TV drama series.
But what's the truth behind the myth? Why does its story stick so firmly in our cultural imagination? Can we learn anything from the tale of the rise and fall of Atlantis? 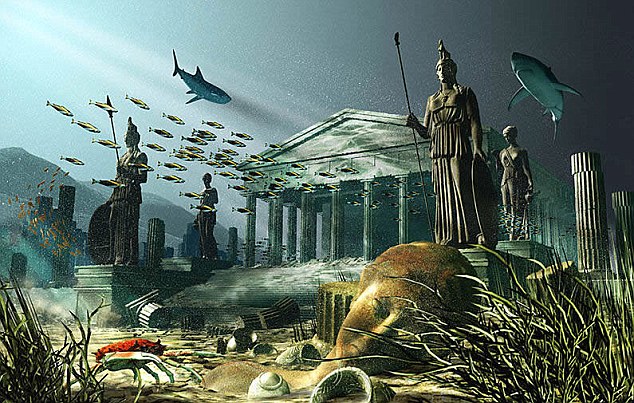 The Story
In 355 BC, the ancient Greek philosopher, Plato, wrote about a lost continent called Atlantis. According to Plato, Atlantis was located in the Atlantic Ocean near the Straits of Gibraltar, until it sunk beneath the waves more than 10,000 years ago.
Later accounts of Atlantis tell of a people who were advanced in every aspect of culture - arts, medicine, crafts, science. They were also a spiritual people, using the power of crystals for healing and working together as one rather than as individuals. But, the story goes, that their utopian society collapsed in war and turmoil as pride in their creations and their abilities overtook their spiritual outlook.
Most scholars believe Plato wrote about Atlantis not as historical fact but as moral fable for his students. Although many writers, notably the occult thinker Helena Blavatsky, suggested that Atlantis is a very real part of history on earth. Whether Atlantis is fact or fiction remains a fascinating mystery. But the spiritual lessons that can be taken from the story of the people of Atlantis still resonate today.

Atlantis revealed
The myth of Atlantis holds certain truths that can serve as spiritual and moral lessons for humanity. At its peak, the citizens of Atlantis lived enlightened lives. Their existence can be seen as a metaphor for raised spiritual consciousness. Here is one interpretation of the truths of Atlantis.

Atlantis Idea: According to spiritual authors, the people of Atlantis recognised that the physical body was merely a manifestation of the soul. Therefore they did not fear death. They saw physical death as part of the cycle of life and knew their souls would live on.
Today's Idea: While it's natural to fear the unknown, perhaps the lesson you can take from this Atlantean truth is to see beyond the physical. This means to see there's more to life that acquiring material possessions and to recognise that your body is just a vehicle for your spiritual consciousness. The physical is an important aspect of being human, and we should treat our bodies with respect, but it is only one aspect of ourselves.

Atlantis Idea: It has been written, by famous American psychic Edgar Cayce and others, that crystals were important to the Atlanteans. Gigantic crystals were apparently used as power sources and for healing.
Today's Idea: Tap into the energy of crystals by placing them around your home or by carrying one around in your pocket. Decide upon the energy you need - perhaps to invigorate, or focus, or calm - then choose the relevant crystal. Crystal meanings can be found online or in crystal healing books.

Atlantis Idea: This society was said to have a feminine energy, meaning the people relied on intuition and prized thinking just as highly as action.
Today's Idea: Feminine energy is not limited to physical gender so anyone can tap into their feminine side. Listen to your intuition. Take time to pause and think before you rush to act. What is your inner voice telling you? Is the action you are about to take for good?

Atlantis Idea: The fall of Atlantis is a salutary tale of a perfect society turned bad. It teaches us that the sin of pride can overtake even the most enlightened of people and cause them to falter. According to the legend, the Atlanteans progressed scientifically so quickly that their spirituality became neglected. The ego of a people who had achieved great things grew, and greed and the lust for power entered and ultimately destroyed their society.
Today's Idea: Keep your spirituality on an equal footing to all the other aspects of your life. It is not wrong to feel proud of your achievements but when pride overtakes other emotions and becomes dominant then you will not only appear foolish to others but you are likely to make mistakes.

Atlantis Idea: The Atlanteans sowed the seeds of their own destruction. Their pride led to wars and the ending of their civilisation. They created their own karma.
Today's Idea: Karma is the energy you create for yourself by the actions you take. It is the idea that good or bad acts will eventually come back to you. Remember the guidance, 'harm none', or 'do to others as you would have them do to you' and keep these in mind before you act.