Blood Moon Prophecy: Is It the End of the World?

Said to be the ultimate day of reckoning, will the Blood Moon prophecy end the world as predicted this 28 September 2015? 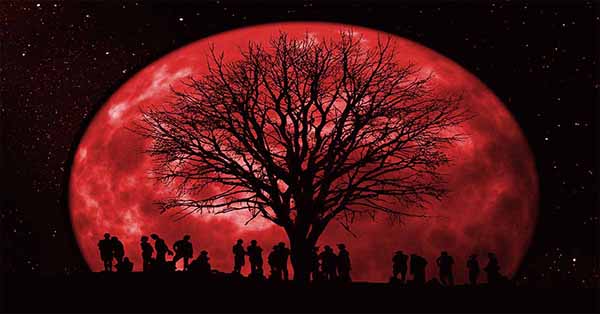 We are in the midst of some very exciting times, astrologically speaking. Starting from January this year, there has been the greatest influx of energy the world has been in a very long time. Is this the vibrational raising that we’ve all been waiting for? Does it have anything to do with the Autumn Equinox?

On September 28 2015, the fourth instalment of a rare total lunar eclipse, dubbed the Blood Moon, will be visible across most areas of the world. Blood Moons and supermoon’s in them are awe inspiring events, but why is this upcoming supermoon and Blood Moon combo causing such a panic?

Well, it might just have something to do with the fact that it’s supposed to herald the end of the world!

Conspiracy theorists are forever coming up with new and spectacular ways to predict the end of the world, but as the disastrous carnage proposed by the Blood Moon grows ever closer, will this event be of biblical proportions or simply a nice night sky display for us all to chat about come morning?

According to the hypothesis, originally described in the Bible (Acts 2:20 and Revelation 6:12), the planet Earth will soon cease to exist – on the 28 September to be precise.

Is the Blood Moon prophecy just another disaster theory to keep up on tender hooks? Or is there something more to this Doomsday prediction? There are plenty of advocates for it, including Jewish mystics, clergymen and self-proclaimed prophets.

So, if like me you enjoy taking time trying to understand your ever-impending doom, here’s our little guide on what the Blood Moon prophecy actually is, and how to handle your (possible) demise.

What is a Blood Moon and Supermoon?

The full Moon on Sunday 28 September will actually be a double whammy of cosmic events; a Blood Moon and a supermoon.

The weekend’s cosmic event will start off with a supermoon. In the early morning of September 28, the moon’s orbit will be extra close to Earth, causing an optical illusion called a supermoon. Because of the closer proximity, the full Moon will be extra bright – especially around the hour of 2am GMT.

Of course, this is only the beginning. Because soon the engorged moon will start to vanish, and by 3am will have almost completely disappeared.

The eclipsed moon (due to the Earth and the Sun being completely parallel) will still be faintly visible, but instead of its harsh bright light, we’ll see a red version of our satellite friend – the Blood Moon.

Although the name Blood Moon in itself sounds like something lifted off the pages of Twilight, it is an actual thing.

In fact, a Blood Moon is a cosmic event where the surface of the Moon is perceived to turn red to the naked eye due to the reflection of sunlight on the Earth’s atmosphere.

What is the Blood Moon Prophecy?

But why is this seemingly ordinary, although still extraordinary, event being pushed to us as the end the time itself?

Although the hypothesis was originally discussed in the Bible, the end-of-days theory as we know it today was actually made famous by Christian ministers John Hagee and Mark Blitz.

The Blood Moon theory has been interpreted from the Book of Joel, which says: "the sun will turn into darkness, and the moon into blood, before the great and terrible day of the Lord comes."

They proposed that an ongoing 'tetrad' of lunar eclipses would be the indicator that the end of the Earth was nigh; an act that was first described in the Bible in acts 2:20 and Revelation 6:12.

The 'tetrad' they were going on about -; that is four consecutive lunar eclipses in a small space of time – has already started, with the first lunar eclipse having taken place back in April 2014, with six full moons in between.

The ministers declared that upon such event, terrible and tragic events would hit the planet and its inhabitants – possibly wiping mankind out.

But this isn't the first time such a prediction was made. In fact, this phenomenon has happened before, throughout the 1900's in fact. The previous tetrad, like the current ongoing one, also fell upon the Jewish holidays of Passover and Tabernacles, and again when Israel became a nation and retook Jerusalem.

Will there be fire and brimstone?

No one can say for certain what will happen on the 28 September, and there is definitely a mixed bag of opinions on the matter, too. Some believe the Blood Moon will signal an incredible celestial event, others believe the event will be a religious omen beckoning the second coming, and yet more people predict that a catastrophic earthquake and tsunami (due to the pull of the moon) will destroy life on Earth. Oh, and then there’s the asteroid as well – which really would bring forth the fire and brimstone.

The lunar eclipse on 28 September also has strong astrological meanings and implications. Because this full Moon will rise in the first degrees of Aries, the Blood Moon will also carry with it a strong energy that relates to fire, taking action and assertiveness.

The full Moon event also coincides with the Sun in Libra, triggering a shift in paradigm and self reflection.

Because of the above, the Blood Moon is an opportune moment to seek and regain balance in life.

Although emotions may be running high during the coming weeks, it is paramount that one is diplomatic when solving altercations. Now is the time to stay calm and controlled, and give freely to others, as well as yourself.

What do you think the Blood Moon will bring? Do you think it's the end of the Earth, or do you think that this is the beginning of a great paradigm shift? Let us know in the comments!