With the recent discovery of a new 'Superhenge' just a stone's throw away from Stonehenge, we take a look at the top stone circles around the British Isles 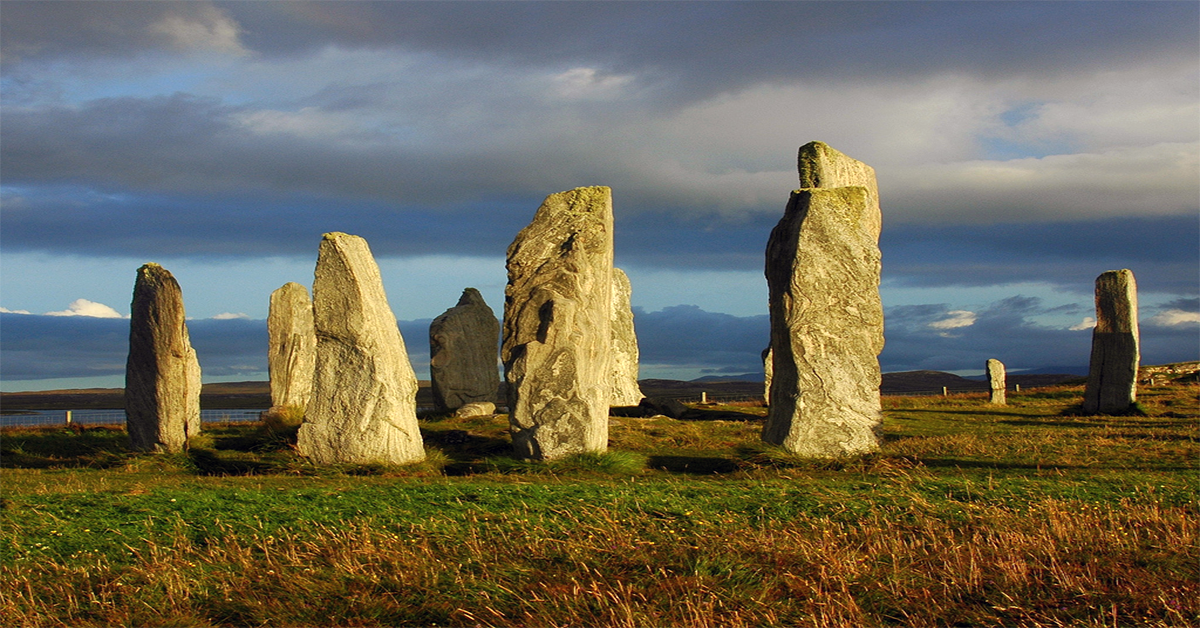 Just when about every archaeologist on the planet thought that Stonehenge and its surrounding heritage site couldn’t offer any more secrets about its mysterious past, a new discovery has been made that may herald an entire new era of discovery for the ancient monument - and one that will add a whole new chapter to the story of Stonehenge.

Located just 3km from the main Stonehenge site, a new so-called “Superhenge” has been discovered thanks to hi-tech sensors that found the hidden arrangement under a thick, grassy bank.

Situated near Durrington Walls, the new prehistoric monument is said to outshine and out scale its famous counterpart dramatically. Up to 90 standing stones, some measuring up to 4.5 meters and dating back to almost 4500 years, are said to have been buried there for over a millennia.

While the overall purpose of the Stonehenge site and the new Superhenge is still relatively unknown, many support the idea that Superhenge would have been used as a ritual site or as some kind of arena in Neolithic times.

Further mystery surrounds the new site as some believe that the original monument -which is yet to be excavated- was purposefully toppled by Neolithic builders in order to be incorporated into the later built Durrington Walls structure, as part of its southern border.

This new discovery gives us a clear insight into how the Stonehenge landscape has changed throughout history, with new monuments being built upon old foundations and beyond, with some of the first stones in the Durrington Walls perimeter being laid around 3100 BC.

In honour of this new discovery, we’ve compiled a list of our top 10 most beautiful and dramatic stone circles in the British Isles. Check it out!

Believed to be an important Bronze Age ceremonial site, Boscawen-Un is located off the beaten track in the heart of Cornwall. Not only is this stone circle remarkably well preserved, but it also contains an extra central stone in the middle of the circle, predating the megalithic circle surrounding it!

As with many stone circles, Boscawen-Un features 19 outer stones (a common number in stone circles) which are said to represent the cycle of the moon. The central stone, believed to predate the later stone circle, has two faint axe-shaped carvings at its base. Some have suggested that the angular shape of the rock along with its engravings were an integral part of fertility ceremonies in Neolithic rituals.

Set in the centre of picturesque Stanton Moor, Derbyshire, the Nine Ladies is a small Bronze Age stone circle, and is supposedly named after folk tradition in which it is said that 9 women were dancing to a fiddler on the Sabbeth, and were later turned to stone.

Don’t be fooled by the name though, there are actually 11 stones in the vicinity, one of which lays flat on the ground and the other -the King Stone- 40m apart from the rest.

As with most stone circles, there is little to no evidence or historical reasons for its use.

This complex site, located near Bristol, Somerset covers such a vast space it is almost a challenge to truly appreciate their grandeur. Consisting of 3 stone circles and a Cove, take your time to marvel at the surrounding area – it helps that this site is still relatively unknown and secluded!

Stanton Drew is actually the 3rd largest collection of megaliths in England, with surveys conducted in 1997 suggesting that the already large site was once an even bigger structure that linked with neighbouring stone circles over 800m away.

Legend says that there once was a wedding party that took place at one of the stone circles on Sunday, much like the tale of the 9 ladies stone circle, and were serenaded by a musician who was the Devil in disguise. The party went on all though the night, and by morning the party goers were turned to stone for their wickedness.

The site is still an important area for Pagan weddings and Druids, and it is common to find offerings hidden amongst the stones. But be warned, if you remove these offerings you will find yourself cursed with bad luck!

The largest stone circle and henge on the isles of Orkney, Scotland, the Ring of Brodgar is a Neolithic monument that dates back to approximately 3,300 BC.

Initially believed to have been made up of over 60 megaliths, the current stone circle is now made up of 27 standing megaliths.

Again, while not much is known about the site and its history, one poignant and interesting story is that of the nearby Ness of Brodgar. Once a thriving community, it is said that a great feast took place where over 600 cattle were slaughtered.

But after this event all records and historical evidence of the peoples disappear. What happened to the community? Some claim it was climate change, while others believe a sudden change in religious beliefs caused a mass exodus.

Set within a stunning and atmospheric natural amphitheatre that’s nestled in between the mountains of Helvellyn and High Seat, the panoramic views of Castlerigg are not to be missed.

Amongst one of the earliest stone circles in Britain, raised about 3000 BC during the Neolithic period, Castlerigg is officially made up of 40 megaliths. However, due to erosion the exact number of megaliths is uncertain, as a further 4 additional stones have been discovered.

As with other stone circles, the Castlerigg stone circle has a number of significant astronomical alignments, with a number of stones specifically aligned and associated with the orbit of the moon and the midwinter sunrise.

Comprised of 3 arrangements, the Rollright Stones are located on the boarder of Oxfordshire and have been associated with many myths and legends in their time.

The main stone circle is made up of an impressive 77 megaliths, and is aptly named the King’s Men. Heading east from the stone circle you will find a Neolithic dolmen, an ancient burial chamber known as the Whispering Knights. And finally, a solitary megalith can also be found, simply known as the King.

Some say that the stones are the remains of a King and his knights, who were turned to stone by a haggard old witch called Mother Shipton.

4 – Long Meg and Her Daughters

While officially known as Maughanby Stone Circle, this stone circle located in Cumbria is more often referred to by its nickname, Long Meg and Her Daughters. Comprising of over 51 stones, the stone known as Long Meg actually sits outside of the circle, and is believed to act as a sundial when its shadow is cast along the stones.

While the origin of the nickname is understandably uncertain, the most popular theory claims that Long Meg was the name of a dark witch who was turned to stone, along with her coven (her Daughters) by a wizard named Michael of Scotland.

Located on the Isle of Lewis in the Outer Hebrides, the Callenish Stones are the most remote of the stone circles featured on our list. Dating back to the late Stone Age (2900 BC), it features 13 stones that form the circle as well as a stone avenue that act as a walkway towards the circle.

The stark and rugged terrain of the Isle of Lewis was once said to be the home of Giants, with folkloric tales describing how the Giants of Callenish were turned to stone by Saint Kieran for rejecting Christianity.

Fun fact – The Callenish Stones were featured in the Disney Pixar film, ‘Brave’!

Now the final two stone circles on our list come as no surprise, with their beauty and folkloric history still withstanding and appealing to the modern generation and historical site seeker.

Avebury Circle, located in the small village of Avebury, Wiltshire, is one of the most unique megalithic monuments in Britain, and is just as mysterious as Stonehenge. Containing 3 stone circles, Avebury is considered the largest stone circle in Europe, and is also one of the most bountiful prehistoric sites in the Isles.

Dating back to 2600 BC, Avebury is comprised of one large stone circle with two smaller circles situated inside the centre of the monument.

Just like Stonehenge, this stone circle is an important religious site to modern Pagans, and has many myths and legends of a supernatural nature surrounding it. Some consider the site a ritual site for the worship of a snake God, due to the serpentine layout of the monument.

One of the most iconic and striking images in the British Isles, Stonehenge is a UNESCO world heritage site and has been considered as Britain’s most important ancient monument throughout history.

Perhaps the most famous Neolithic site in the world, Stonehenge is located in Wiltshire and is believed to have been constructed between 3000 BC and 2000 BC. Stonehenge is set in the middle of a dense complex of Neolithic and Bronze Age monuments and burial grounds, with the famous monument still standing in stark contrast to the flattened surrounding area.

While little is known about the history of Stonehenge and its purpose, many modern Pagans still gather at the historic site for the Winter and Summer Solstice, when the central Alter stone aligns with the Heel stone, Slaughter stone and the rising run shining from the North East.

Believed to have been abandoned from around 1800 BC, some believe that the sites diminish in importance aligned with the arrival of the Beaker People, but others also claim tribal conflicts and mass sickness and depopulation are also to blame.

What do you think about the new “Superhenge” discovery? Should plans be put in place to excavate the site or should it be left alone? Have you visited any stone circles in the British Isles? Let us know your thoughts and experiences in the comments!