Birthstones and Their Meanings 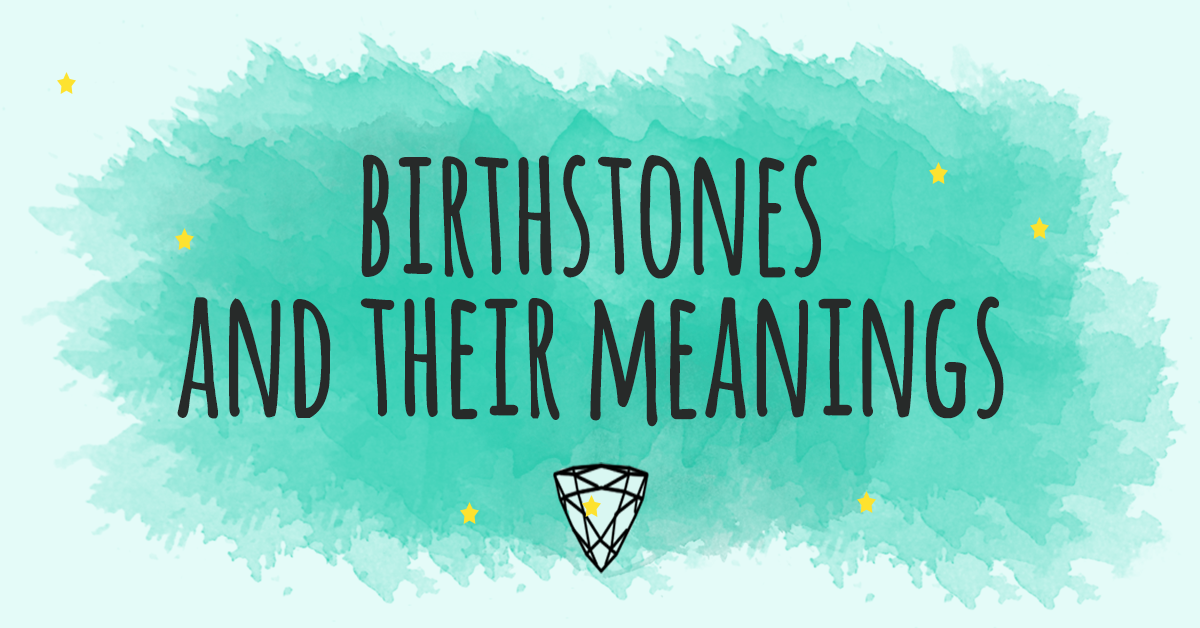 Revered since ancient times, gemstones have been highly valued by many for both their dazzling beauty and rarity. They have also gained major symbolic connotations, with numerous myths and legends throughout the ages describing the mystical forces and healing powers that shroud certain stones, protecting their owner or wearer. And these mysteries have since fed through time to the present day, where we now traditionally link birthstones to calendar months, with each month being represented by its own unique birthstone with its own particular qualities.

The history of birthstones is believed to have dated back to the times of both the Old and New Testament. Throughout these biblical times gemstones were given significant mention. However one of the most notable stories and logical beginnings of birthstones stems from the breastplate of Aaron, a Jewish high priest, which contained twelve gemstones that each represented the twelve tribes of Israel.

Later, during the first century, twelve gemstones were matched to the signs of the zodiac which when worn on their specific month would provide the wearer with a sense of heightened protection and bless them with therapeutic, healing powers. It was believed that by owning every gemstone and alternating them each month you would be highly protected by their sacred powers throughout the year.

These traditions have since been passed on to the modern world where many people love to wear their birthstones set in jewellery, their ancient meanings and associations still holding true. Below you can find a list of the months and their matching birthstones with their mysterious benefits.

(The modern list of birthstones we use today was originally compiled in 1912 by the National Association of Jewellers, and has had occasional adjustments made since.)

Contrary to belief, garnet comes in a variety of colours other than the traditional blood-red. Said to signify loyalty and consistency, wearers may feel an increase in self-image and bonds with friends. This is also the gemstone of choice for would-be travellers, as it is thought to keep the wearer safe during travel. It might also prevent snakebites, so if you’re ever travelling into the jungle...!

This beautiful purple stone holds a wealth of noble connotations. Traditionally associated with royalty, amethyst is also said to be a symbol of protection that has the power to help anyone overcome times of difficulty. This stone may also help with peace of mind; keep it close while meditating to bring stability to a restless mind.

The pale blue of aquamarine signifies its association with the gift of foresight, inspiration and insightful knowledge. This stone may bring a sense of mental clarity like no other to the wearer, and may help build the strength and courage you need to achieve a true sense of self. Will you be heading to sea any time soon, bring along an aquamarine talisman for safe sailing? Sailors used to believe aquamarine protected them from the dangers of the ocean.

Diamonds are so much more than a girl’s best friend. The most popular gemstone on the planet, they are the symbol of purity, courage, innocence and eternity. They were even believed to be the tears of the Gods. It’s little wonder why diamonds have become archetypal image of eternal love.

Green is for prosperity, and emeralds will give you plenty. They will also bring their wearer happiness, success and goodness. Mined and valued since ancient times, emeralds have also long been associated with fertility and rebirth. Cleopatra was apparently a fan.

Once believed to be the hardened tears of joy from Aphrodite the Goddess of love, pearls represent an inner hope, innocence and purity. Wear pearls if you wish to be healed or when you want to repel evil. Equally you may wish to wear them on your wedding day, as they are said to help with bringing stability to marriages.

The deep-red ruby stimulates love and passion, and is a nurturing gemstone that elevates our emotions to new levels. Those who wear rubies may be protected from evil and will attract a flurry of good companionship and luck. As a psychic, rubies are an excellent choice of stone to help you shield your space as well as gathering and amplifying your energy.

Brought to life through volcanic eruptions and said to be the tears of Pele, the Hawiian goddess of volcanoes, peridot was born to represent strength and power. On the flip-side peridot also represents a calming power, and can help balance your mind as well as calm ill-moods. It can also aid with digestion and insomnia, and if set in gold can even ward off terrible nightmares.

Revered for its protective spirit, it’s little wonder why Sapphire was worn by medieval clergy to symbolise heaven, while the commoners wore it to attract the protection of heaven. Wearing sapphire may bring a heightened sense of spiritual purpose and increase ones mental clarity. The stone of choice for those who seek serenity, wear sapphire in moments where a clear mind is needed.

Hope comes in the form of opals. This radiant stone can help heal and as well as protect its wearer’s eyesight. The Greek’s term for opal meant “to see a change” – a term which might not just be referring to the characteristic appearance of this precious stone.

The physical representation of love and affection, topaz helps promote strength, serenity and wisdom in its wearers. Topaz is also be a great soother; a soother for both the mind and body which can aid in boosting mental clarity, inner peace and creativity. If you’re not in a good place emotionally, topaz can also help support good mental health. Use it during meditation to focus on the good you wish to see.

Turquoise is regarded by many as a potent love charm, as well as a symbol of good fortune and success. Its blue hue aiding in the relaxation and soothing of spirit. Many wear turquoise in order to protect themselves from harm, and turquoise rings in particular are said to ward off evil spirits... all the while looking spectacular!

Do you wear your birthstone with pride? Or have you noticed any changes in yourself while wearing any of these stones? Let us know in the comments!