Signs That You May Be a Witch

Have you ever wondered if you could be a witch? Do you long for the moonlight or mull over herbal remedies? These are just a few of the signs... 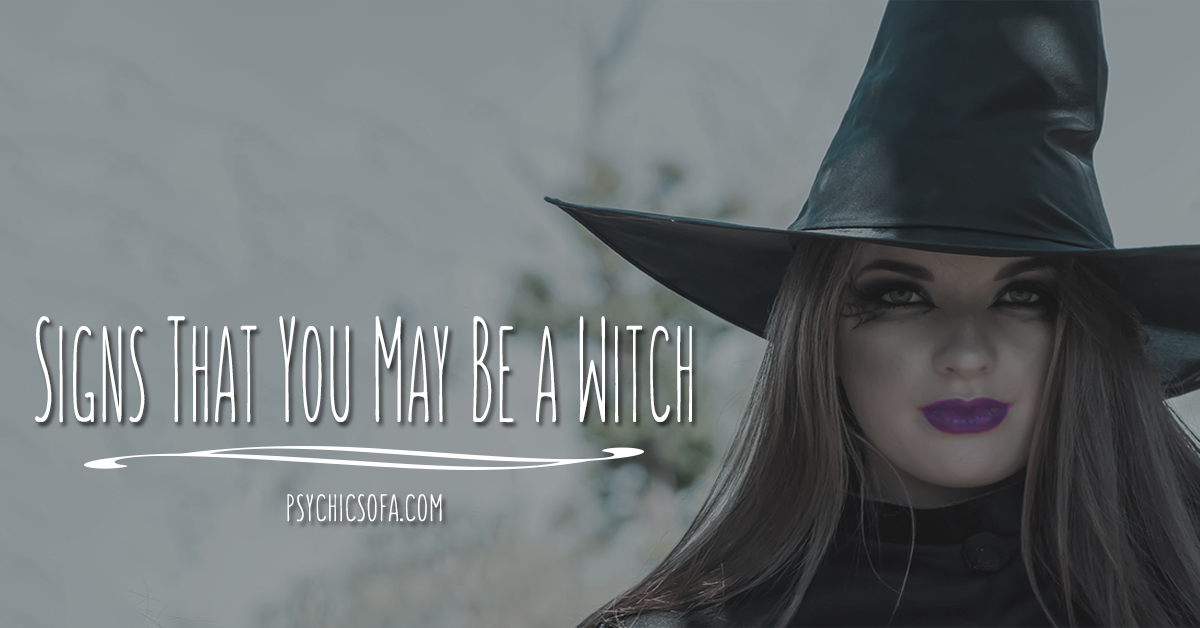 Many of us are well acquainted with the archetypal, folkloric images associated with witches. From the haggard, wart-nosed crone straight from the Disney vaults to the seductive enchantress featured in legends of old, witches have been established in our minds as an image of both power and fear. But has this always been the case? What is the truth behind witchcraft, and why do we only now think of witches in such a needlessly negative light? And furthermore, how can we ourselves find out if we hold magic potential?

Traditionally, the term ‘witch’ was synonymous with that of a wise woman - a mysterious individual with curious healing powers and an infinite knowledge of herbal and holistic remedies. However, where they were once treated with reverence and respect, soon witches were persecuted by their thousands for their witchcraft and sentenced to death. The days of the witch hunts in the sixteenth century ensured that in a period of masculine, patriarchal society, there would be no more tolerance towards women who spoke out or exhibited any form of power. Due to the risk of being targeted, the practice of witchcraft soon became one that was steeped in mystery, secrecy and shame; never again to become part of the everyday societal norm.

But that’s not to say they no longer exist. In fact, there are millions of witches walking amongst us right now, today. While they might not look like the typical image, their powers are still as strong as they were in times gone by. They have simply adapted. And a modern witch can go by many names. A Healer, a Goddess, a Shaman... a Witch. But no matter the name or path they walk, these beautiful souls perform their sacred and loving gift in order for us all to be at peace in the world.

In fact, it almost looks like witchcraft is on the rise once again. In the times of our current global awakening, people are finally starting to interact with nature and their instinctual senses at the same level as we used to. Natural and herbal medicines, as well as holistic therapies, are on the rise and even modern medicine has conceded that there might be more than a little truth in its potential.

One thing is for certain though, if witches are making a comeback, then we need to know how to spot one and consider if we ourselves could be witches. So without further ado, here’s our list of signs that you’re a natural born witch:

You Are at One with Nature

This is a no brainer. As a witch you are most at ease and content when around Mother Nature, and have a natural affinity with the elements. Your instinctual nature comes to life in abundant natural beauty, and you often see the natural, medicinal potential in plants. Of course, this love of nature means that you also constantly long to be in the outdoors and take every opportunity to disappear into it. And even when you’re not, at least your house is full of greenery and life.

Your Wisdom Is Stuff of Legend

People have always flocked to your proverbial bubbling-pot of natural, healing wisdom. Unlike others, your comprehensive knowledge and innate, peaceful mannerisms put those who seek you at ease. They are drawn to your powerful energies. Your warmth and heart often leave people bamboozled, but so does your keen knowledge of all things spiritual, herbal and philosophical, too.

Animals Are Your Friend

Witches and animals are like kindred spirits. They have a special bond that only another witch can truly understand. Your natural affinity with animals has played a big part in your life, too. Whereas some animals can be wary of humans, they take a natural liking to you. Birds fly and hover closely around you, cats and dogs cross paths just to greet you... half the time your friend’s joke that you’re Snow White! Of course, there is a reason for this connection; as a witch you are part of another level of insight, much similar to that of an animal. You recognise this intuition in each other.

You Channel the Power of Mother Earth

Mother Earth, Mother Nature, Pachamama. No matter her name you still understand her power, will and gift at a fundamental level. As a witch, you are at one with nature and have inherited this magnificent potential. You can heal, transform and bring life to this planet. Your energy is naturally aligned to that of nature’s, with the seasons dictating how to expel this energy. Nature’s energy freely flows through you.

The Moon Guides You

Just like the energy of nature, so too are witches moved by the power of the moon... There’s a reason behind the stereotypical image of a witch by moonlight, after all! So, do you often bask in the moonlight? Do your ideas and inspiration flow easier by night? Then just maybe you’re a witch who is attuned to the natural mysteries of the moon and its cycles.

You Have a Knack for Healing

Being so attuned to the earth, it’s of little wonder why witches make such great healers. As a witch, your energies and spirit compel you to create change in the world. While some witches make use this power for bad, most use this natural inclination for good, entering professions of a healing, therapeutic nature. Are you inclined to seek natural, medicinal and holistic remedies? Are you often there to give support to others in times of need? This is Mother Nature’s way of telling you to get out there, use your potential to heal and open the eyes of others. So go on, what are you waiting for!

Maybe it’s just the modern stigma, but as a witch you’ve always felt like a bit of an outsider. Try as you might, you have found it difficult to conform to the ordinary... because you are extraordinary. And people have always sensed this about you, a special feeling they can’t quite place. Unless they are another witch of course - they can zone in on your potential instantly, and more often than not you attract people of a similar witchy disposition. It’s not that you want to be different; it’s simply that you ARE different.

How do you fair? Do you have the makings of a witch? Have you just realised your true potential? Or maybe you have some other suggestions about what it is that makes a witch. Leave us your comments!