Here we take a look at the history and traditions of the Chinese New Year celebration.

What is Chinese New Year?

Chinese New Year, also known as the Spring Festival and the Lunar New Year, is the oldest and most important celebration in the Chinese calendar. The Chinese use the Lunar calendar, and therefore the date of the New Year changes annually, depending on the date of the new moon, which is usually in late January or early February. The celebrations usually last for fifteen days, beginning on the day of the new moon and ending with the Lantern Festival at the full moon. The Chinese calendar is made up of a cycle of 12 years, each named after a different animal. Similar to our zodiac signs, the different years have different themes and characteristics, and it is believed that those born in these years will embody these different traits. 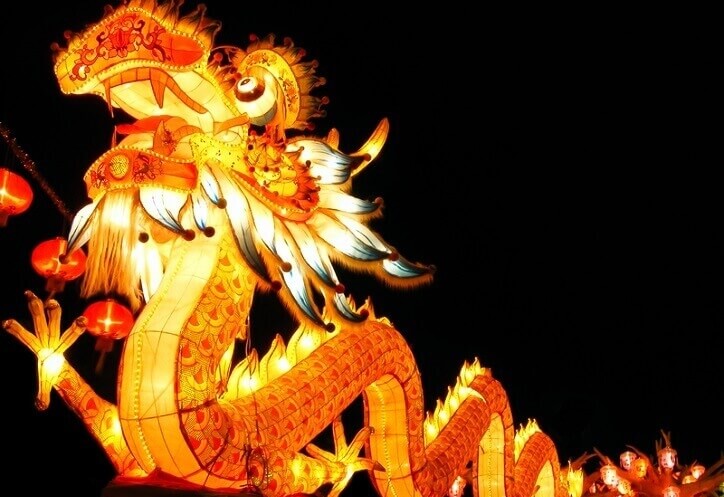 Legend says that the Chinese New Year began with the fight against the mythical beast named the Nian. The Nian would appear annually on the first day of the new year, rampaging through the villages causing chaos, and eating crops, livestock, and even villagers. The villagers lived in fear of the beast, and so in a bid to protect themselves when the day came, they would leave food in front of the doors of their houses, in the belief that the Nian would be satisfied by the food they had prepared and would leave them alone.

One year, the villagers discovered that the Nian had a fear; on its rampage through the village, it was scared away by a small child wearing red. The villagers realised that they could use this fear to their advantage; as the next new year approached, they prepared for the arrival of the Nian by hanging red lanterns throughout the village, and put red scrolls at their windows and doors. When the Nian arrived, they set off firecrackers. The Nian was scared away and did not return. It is believed that the Nian was eventually captured and enslaved by an ancient Taoist monk, Hongjun Laozu.

The tradition of hanging red lanterns and other decorations has carried on and is a big part of Chinese New Year celebrations to this day. The celebration is very family oriented and is a time to honour and remember ancestors as well as deities. In the run up to the New Year, families prepare for the festivities in a number of ways; they clean their houses, sweeping away any bad luck, and then decorate with the traditional red and gold lights, lanterns, and scrolls, with messages of good fortune and wealth. It is thought to be bad luck to clean on New Year’s Day, as it is believed that it will sweep away any good luck brought in with the new year. People also like to repaint doors and windows in fresh red paint. Personal preparations include buying new red clothing to wear to the celebrations, and having a hair cut.

On the eve of the New Year, families come together to celebrate with a big feast. Traditional food is consumed, such as ‘jiaozi’ (boiled dumplings) or nian gao (sweet rice pudding). Often a coin is hidden among the food and is thought to bring luck to the person who finds it. The celebrations continue throughout the night until the fireworks and firecrackers are let off at midnight, again keeping with the tradition of scaring off evil spirits.

On New Year’s Day, children receive red envelopes or packets called ‘Hong Bao’, usually containing sweets or money, gifts from relatives. It is thought to be bad luck and ill manners to open these in front of the giver.

Join in the Chinese New Year celebrations this year by embracing and practicing some of the traditions.